Trusted and loved by lawyers worldwide

“This is an AMAZING service. As a mentor for lawyers, I have shared this tool in my Facebook group of over 800 people. It's phenomenal. I love the speed with which I receive transcripts and the cost.”
Allison W., Lawyer, New Jersey

“A friend of mine from law school recommended Sonix. We do mostly independent medical examinations for insurance and legal purposes, etc. I love the simplicity of dragging the file and proceeding with the transcription process. Also the transcript is available very quickly.”
Stephen S. Lawyer, British Columbia, Canada

You are a legal firm, not a transcription firm.

Focus on the research and synthesis of the evidence at hand. Leave the headache of transcribing audio and video files to us. Need an hour-long deposition or call transcribed quickly and securely? We'll automatically transcribe it in under 5 minutes with our automated algorithms.

Sonix transcripts are stitched to the spoken words and each word is individually timestamped. This makes it easy to navigate your transcript efficiently. Sonix will make your life so much better. 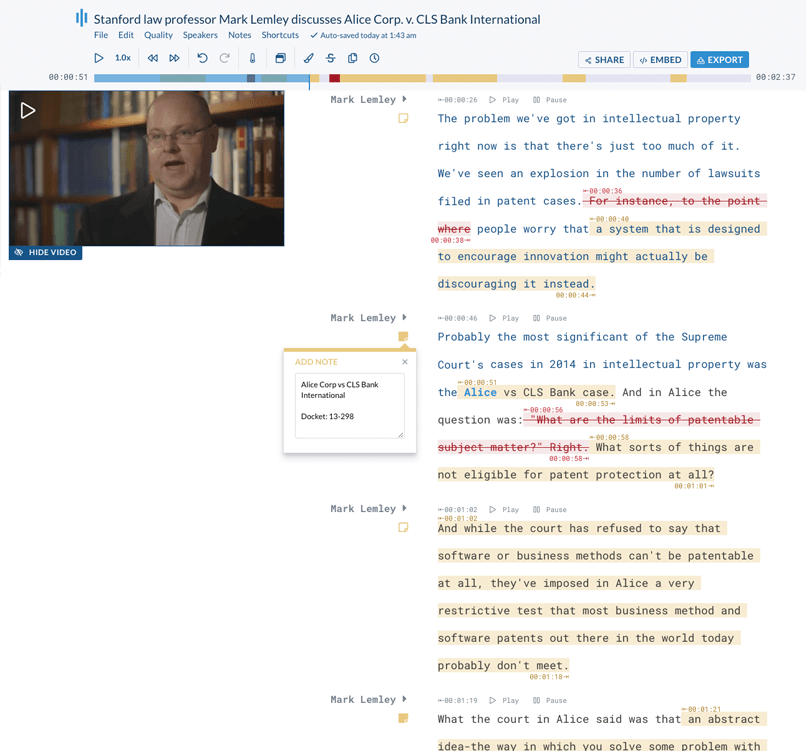 By transcribing with Sonix, you can easily find spoken words across all of your media files. And with a simple click on the word or phrase, you can quickly listen to the surrounding context. You can try it here on the read-only transcript view of this video.

See something important? Just highlight it. We'll remember it for you and we'll show the start and ending timestamp of that section. You can easily export these sections into your other workflows.

Click on the sticky note icon to add a note to your transcript. Quickly navigate the transcript from the notes menu. You'll see all of your notes. Click on the note's timestamp to jump to that exact moment.

Credit to Stanford University. The original video can be found here: https://www.youtube.com/watch?v=NPSha5ZZUwk

: The Supreme Court this past term had 10 intellectual property cases which is more than they've had in over a century.

: Intellectual property is patents, copyrights, trademarks all things that are designed to give people protection for their ideas or the things they create.

: The problem we've got in intellectual property right now is that there's just too much of it. We've seen an explosion in the number of lawsuits filed in patent cases. people worry that a system that is designed to encourage innovation might actually be discouraging it instead.

: Probably the most significant of the Supreme Court's cases in 2014 in intellectual property was the Alice vs CLS Bank case. And in Alice the question was: What sorts of things are not eligible for patent protection at all?

: And while the court has refused to say that software or business methods can't be patentable at all, they've imposed in Alice a very restrictive test that most business method and software patents out there in the world today probably don't meet.

Supreme Court: An abstract idea cannot be patented just because it is implemented on a computer.

: What the court in Alice said was that an abstract idea-the way in which you solve some problem with software is unpatentable unless it's coupled with an inventive concept: some particular new means of implementing that abstract idea.

: One of the things we've seen is a wave of decisions by the lower courts that have mostly invalidated a couple of dozen of these patents. And I think there are probably hundreds more such cases coming up in the next year or so.

Patent lawsuits after Alice: Down 33%

: The other thing we've seen is a significant drop in the number of patent lawsuits filed since Alice. It's down 33 percent. And I think what we're seeing is a reaction to the court's conclusion that there are too many software and business method patents and they've claimed too broadly.

: I think what you what you want is not a pendulum that swings back and forth past the optimum that happens to hit it occasionally in the middle. Right? What you'd like to do is dampen those swings you'd like a system that's closer to balance. Right? That's not wildly overprotective but not wildly under protective either.

: For more please visit us at Stanford.edu.

Sonix uses advanced computer algorithms to transcribe your audio and video files. Thus, humans do not have access to your sensitive information. All of your media (audio, video, and transcripts) is transmitted securely over 256-bit SSL and is also encrypted at rest. You can read more about how serious we are about security on our security page.

If many lawyers are working on a case and need access to video or transcripts, you’ll love our multi-user plans (Business and Enterprise). You can set multiple levels of permission for users who are internal team members as well as external editors.

Or, if this is too much, you can securely share via email or by sending someone a secure link to view the transcript. For example, here is the read-only transcript view of this video.

Sonix is the best automated transcription software available online for audio and video files in 2020. See why on our homepage

to see our Enterprise plan and all of the additional Enterprise-grade features. Visit our pricing page

Please fill out the form and ask your questions in the 'Anything else we should know?' field. Our Enterprise team will respond to you quickly. [email protected]

Upload your calls, depositions, or unsworn testimony to our secure servers. We accept most audio and video file formats.

We'll give you a transcript in minutes. There might be a few errors, use our powerful editor to easily make corrections.

The best way for law firms to convert audio to text

Transcription perfectly made for law firms

Sonix transcribes, timestamps, and organizes your audio and video files in over 35 languages so they are easy to search, edit, and share. Start your free trial now—all features included, no credit card required.